For all the beauties that Paris has to offer, the city conceals just as much as it gives, and there are many hidden gems under the cobblestones. For the adventurers out there, the catacombs, for once, can provide you with just as many frissons as you are yearning for. But for those of you who are looking for a more symbolic sort of underground, Paris also has a lot to offer. From bars to nightclubs to art squats, there is definitely more to the capital city of France than the Eiffel tower and the Champs Elysées.

Without further ado; here are a list of the underground Paris. 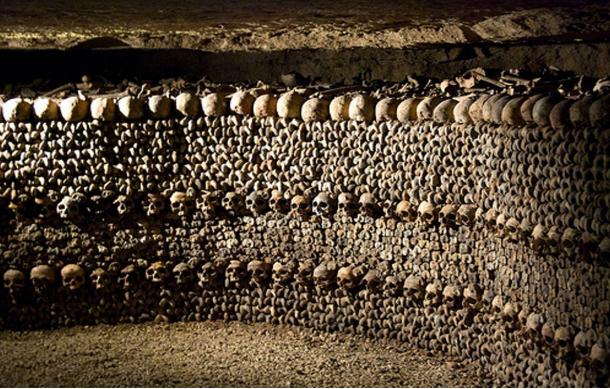 When public cemeteries and burial pits started overflowing after a series of revolutions, the State decided to transfer the bones of six million people to the ancient mines of Paris, a 300 km long (186-mile) tunnel network. Now known as the catacombs, this underground labyrinth has become somewhat of a myth, and one that, lucky you, you get to visit.

The entry to the catacombs is located right outside the metro station Denfert-Rochereau. You have to keep in mind that the line is one of the longest in Paris, so you should try to get there as early as possible. Once you get your ticket, you will go down a nineteen-meter long spiral stone staircase and dive in the depths of Paris. After going through a series of galleries where the silence is just as thick as the walls, visitors will find themselves in front of the ossuary entry, right by a hidden aqueduct. The inscription there is terse: “Stop! This is the Empire of the Dead”. Among the bones of Marat and Robespierre, you will find skeletal works of art, such as a heart made of skulls and tibias. Along the way you will also find gloomy quotes from various poets and writers. The tour lasts approximately 45 minutes but you will see, through these two kilometers of gallery, that many portions of it are closed to the public. For the bravest ones among you, those who love urban exploration and such, there are some secret entrances to the catacombs, notably in La petite ceinture, the abandoned railroad that circles around Paris (look up secret entryways online).
Underneath, a community of cataphiles like to explore different areas, restore old passageways, and add new alleys to the already existing maps. “Tourists”, as they call it, are rarely welcome and you will probably need a guide if you want to explore a bit of the secret parts of it. There are three golden rules one should always follow in the “underworld”: “what comes down must go up”, which means that cataphiles will not allow littering, « never speak of the above », as many cataphiles use secret identities and do not talk about their “regular lives” among themselves. Last but not least, the motto “never trust anyone” is supposed to remind you that the catacombs are first and foremost an adventure, one during which you will have to be careful since the police are on the lookout. If you get caught though, you do not risk more than a ticket. The main danger is getting trapped underneath. You will need to arm yourself with a map, a torch light, and some food and water. 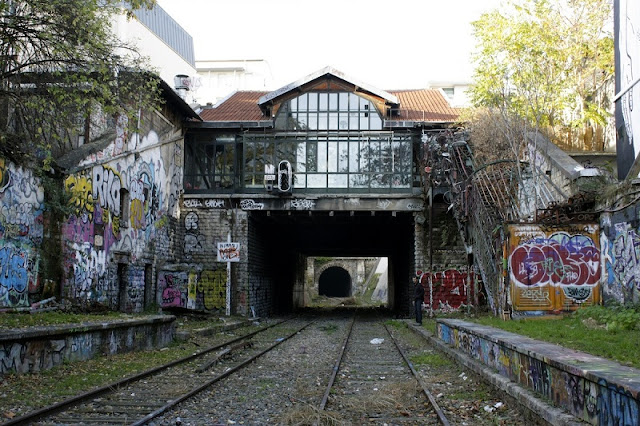 Built 150 years ago, la petite ceinture (“the little belt”) used to be a 32 km-long railroad circling around Paris and is now one of Paris’s coolest illicit pedestrian areas. Except for three small stretches in the 12th, 15th and 16th arrondissements that are now open to the public, most of it is closed down, although fairly easy to access (search through travel blogs for unofficial entry points, most of which aren’t policed). You will need a torch for the darker sections of it (tunnels and such) and might not want to wander out there at night by yourself. However, it is a really nice walk during the day, one that will make you feel as though you were not in Paris, save for a few sections that do overlook the city. These few points that one cannot really see from within the city offer beautiful views that cannot be matched elsewhere. The thick undergrowth and the multiple graffiti offer a one-of-a-kind environment, one in which you can have a gloomy picnic with your friends. 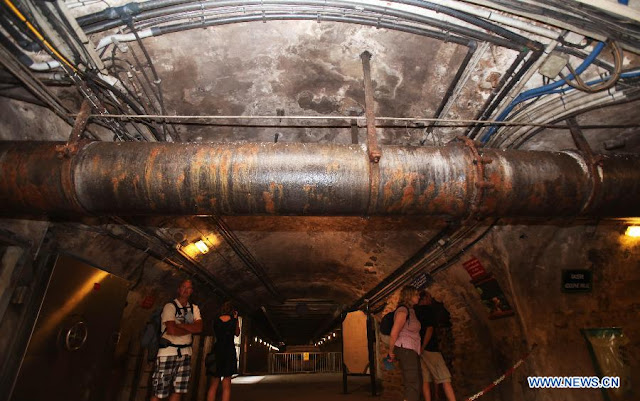 If you are not afraid of rats, water, and smells, you might want to visit the sewer system of Paris, thanks to the museum dedicated to it. After going down a huge staircase, you will go through a long gallery that runs right next to the Seine. You will be surrounded by pipes and basins before arriving in the main room. There you will be explained how the whole system functions and behold the impressive work put in place for it. Fascinating exhibits also give a sense of how the sewer-maintenance equipment has changed from what it was before to what it is now, like the huge wooden balls used to clean tunnels beneath the Seine. This museum also enables you to understand some of the design of Paris as a city. The museum is open daily except on Thursday and on Friday. From May through September, hours are 11 a.m. to 5 p.m.

If you want to pay yourself a spooky visit in the old historic Paris, you should definitely visit one of Paris’ cemeteries, the Pere Lachaise being the most renowned one. Most graves and chapels date all the way back to the 19th century and look like tiny gothic houses. All are unique and beautifully crafted, and make up a peaceful maze. I believe that getting lost in the many paths offered and among the many trees that grow in between two sepulchers is the best way to enjoy the peculiar tranquility of the place. Despite the place’s fame, you will rarely see any crowd there.

There still are, however, a few spots that are not to be missed. You’ll find in the Pere Lachaise the tombs of many famous people, among which the Allan Kardec tomb, the father of spiritism, and that of Oscar Wilde smeared with red kisses. Jim Morrison’s grave is also located in the cemetery, right behind a big chapel, and is protected by barriers so fans can’t tarnish or violate the place. Many people have gone and go there to pay tribute to one of their favorite artists.

Many legends run around the place. It is said for example that touching the well polished part of the Victor Noir tomb will help you be more fertile. A gift from the realm of the dead to the living.

Whether you are a budding poet who wants to get his words out on stage or just a slam connoisseur, Au chat noir is the place to go. Located at 76 Rue Jean-Pierre Timbaud in the 11th arrondissement, it offers a haven of Anglo-Saxon culture in the heart of Paris since most speakers here are Anglophones, even though the public is very diverse and any language is accepted. Despite the café’s popularity among Parisian hipsters, this underground bar has not made it out into the mainstream yet. Lucky you, you get to go and enjoy this unique atmosphere while it lasts!

If you are looking for something more urban than cozy and would rather walk on concrete than sit in velvet sofas, you should definitely check out Le Point Ephémère. This former hardware and building supply store is located right by the canal saint martin and was turned into a 15000 feat square artistic squat in 2004. Willfully haphazard and aesthetically disordered, it is a real incubator for new talents. You can come here to look at the multiple graffitis and works of art on display, as well as to check out one of the many street art exhibits that they have. In the summer, they also offer “apero mix” from 6:30 to 9:30, which means that you get to sit on their terrace and sip a drink with your friends while also listening to a cool concert. The music played there goes from independent pop to hip-hop to techno or rock. You can have dinner there as well. The prices are usually pretty good, especially during happy hours. No need to head to Berlin for street art anymore, you can just stay in Paris! 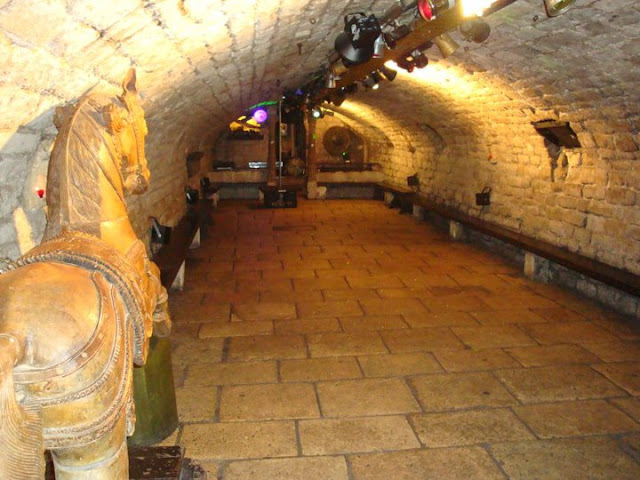 These caves are known as one of the hippest Parisian clubs, coveted by many for all its secret corners and beautiful alcoves. The setting is very gothic, thanks to the multiple candles and paintings. The music helps create the ambiance as well, even though it changes pending which organization is in charge of the night. It usually ranges from classical punk gothic batcave to newer songs. There are some Taverne Médievale nights as well, set up every now and then, and during which you will be able to see knives in armor. The caves are located at 50 rue Saint Sabin in the 11th arrondissement. 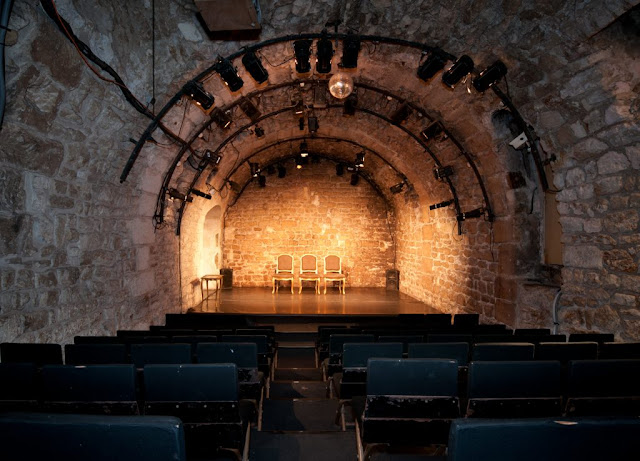 The members of the “Crépuscule des Damnés” (the dusk of the damned) decided to create this theater/concert venue in a former private mansion located right in the heart of Paris, at 8 rue de Nestle in the 6th arrondissement. The music there is rockier than at st Sab, and you will also get to enjoy artistic performances. Look up the program!

This cabinet of (gloomy) curiosities is located near Hotel de Ville and is really worth a visit. Despite its small size, the shop has a lot of unique-and peculiar- things on display, from weird skulls to cthulhu’s statues. Another good place to meet with like-minded people and find flyers for cool parties in bars.

Nicolas is a city guide for Discover Walks Paris and occasionally collaborates with RebelsMarket, He’s also a student at Sciences Po and at the Sorbonne, where he is double majoring in political science and literature. He lives in the north of Paris and enjoys urban exploration and finding out about new places.