My recent vacation in Amsterdam, The Netherlands also gave me the opportunity to visit Brussels and Antwerp in Belgium for a full day tour in a luxury double decker coach. I have arranged the tours through City Discovery for €75 per person. 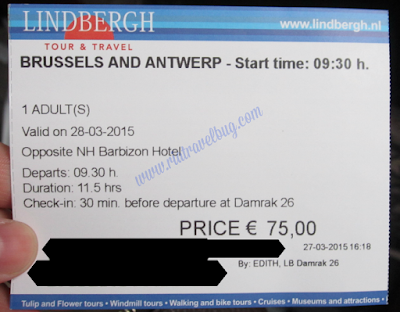 I booked the full day tour after my friend and I got our Schengen visas because I wasn’t sure whether the rate is refundable or not. I didn’t check.

So, when we arrived in Amsterdam, I exchanged the confirmed and paid voucher at the Lindbergh Tours at Damrak near the Amsterdam Central Station. I think Lindbergh is a very famous tour operator there because the other tours I have booked from Viator were also referred to Lindbergh. The tours were really great too.

On March 28, my friend and I went to the Lindbergh Tours to meet our tour guide for the tour along with the other members of the group going to Belgium for a full day trip. The call time was 9:00 a.m. and we left around 9:30 a.m. sharp. Our bus was a luxurious double-decker bus and our tour guide was Pieter. He was really amazing, funny and very knowledgeable who spoke really good English. 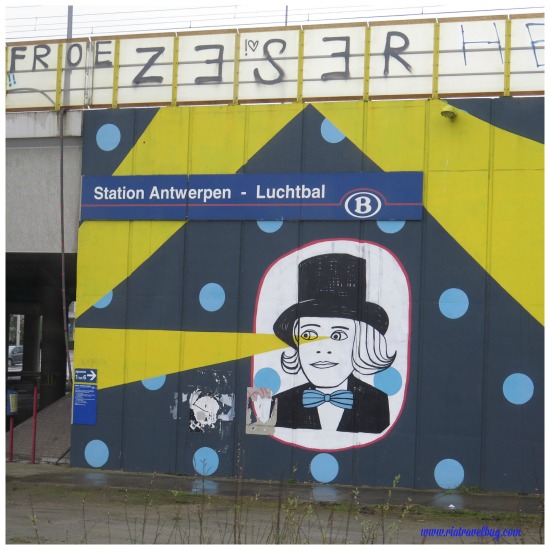 Well, the whole tour was great except for the rain but that didn’t dampen my spirit. We first arrived at Antwerp and was only there for less than an hour. I felt the tour was too short and I wasn’t even able to buy souvenirs. 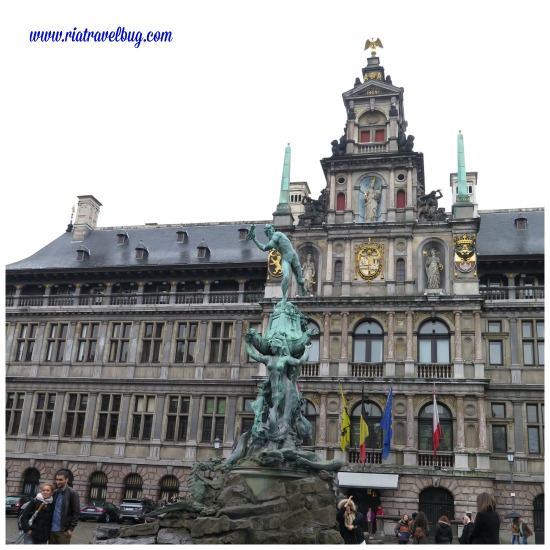 Legend has it, Antwerp got its name from Antwerpen, meaning hand werpen, in English, to throw a hand. Our tourist guide told us the story about how the name Antwerp (or Antwerpen) came about. There was a giant named Antigoon who lived near the river named Scheldt.  He would collect or rather, impose a toll to those who wish to cross the river. And if they refuse, he would severe one of the hands and throw it on the river. Then, the giant was slain by a young man named Brabo who also cut the giant’s hand and threw on the river. Thus, the name Antwerpen came to be.

Cathedral of Our Lady 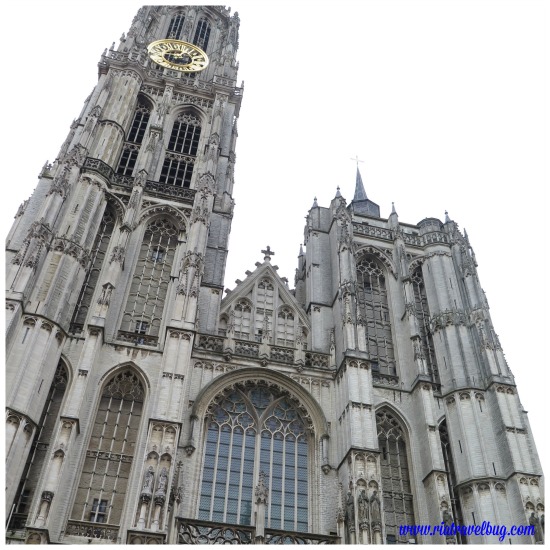 I went inside the Cathedral of Our Lady in Antwerp in the town square. My friend and I did some posing and took some snaps around the area. It was a very quiet day maybe because of the rain but the town square wasn’t crowded. 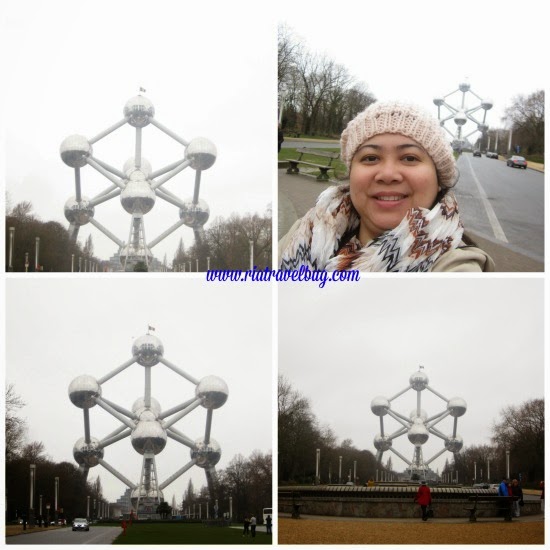 The next stop was a quick photo op in Atomium. I wanted to walk towards the Atomium but our tour was only 15 mins. allocation for that area as a photo op session only. I wasn’t able to see the Mini-Europe. I will be back and next time, I will stay in Brussels! 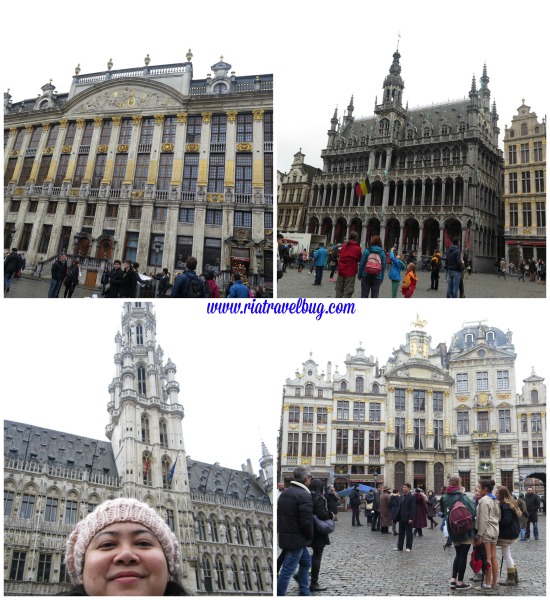 The next leg of the tour was in Brussels Town Square. I am so amazed by the architecture of the buildings around the area. I think, all of Europe’s town squares have similar look and feel. It also looked like the town square in Munich, Germany.

We stayed longer in Brussels. I think it was more than 2 hours of roaming and soaking in the precious culture, arts, history and the whole experience. 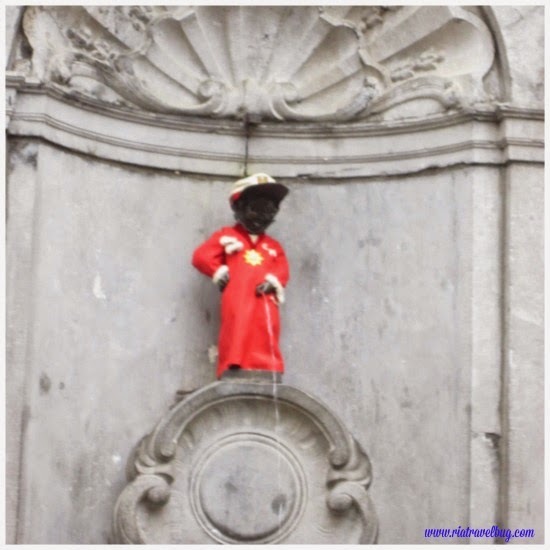 Pieter also took us to the Mannekin Pis (Little Man). It is the famous statue in Brussels of a little boy peeing. I thought it was a big statue but it was small and you’d miss it if you didn’t know where to look. Right beside the Mannekin Pis is a very nice chocolatier called Mannekin Pis Belgian Chocolate…. My friend and I bought some nice truffles for €18 (6 boxes). It was a special promo given to our tour group from Amsterdam. In fairness, it was really crowded and I almost walked out because of some annoying “foreigners” who were haggling beyond “reason.” But, it was just right that I took home a real Belgian chocolate. So, I bought and tasted it and it was the creamiest truffle I have ever eaten in my life. You should visit that place.

A stone’s throw away is the Leonidas and right at the town square is the famous Godiva. I didn’t buy anything from the 2 famous brands because the price might be hefty.

Cathedral of Sts. Michael and Gudule 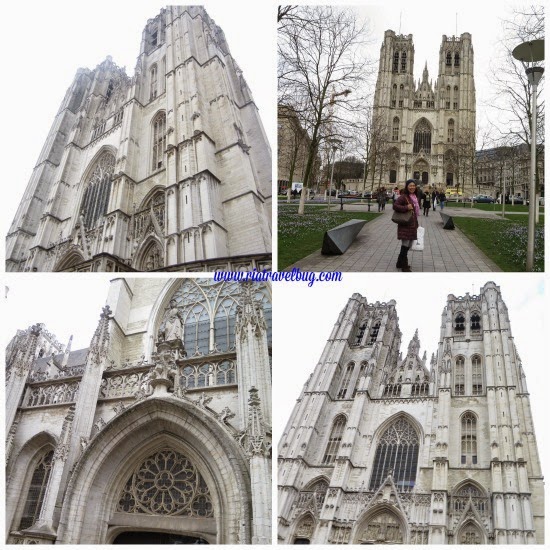 This very ornate church is near the Brussels town square, approx. 2 blocks away. It hs a nice park in front and. 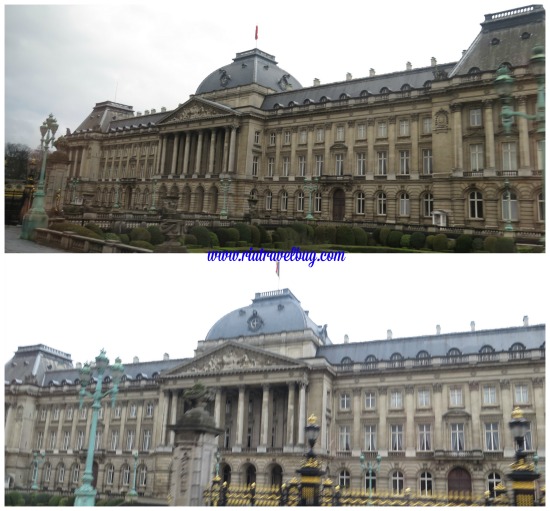 This is not where the royal family stay. It is actually the official palace of the King of Belgium. Whenever I see an architecture like this, it always remind me of the buildings in Paris. I am sure that this design is typical in Europe. 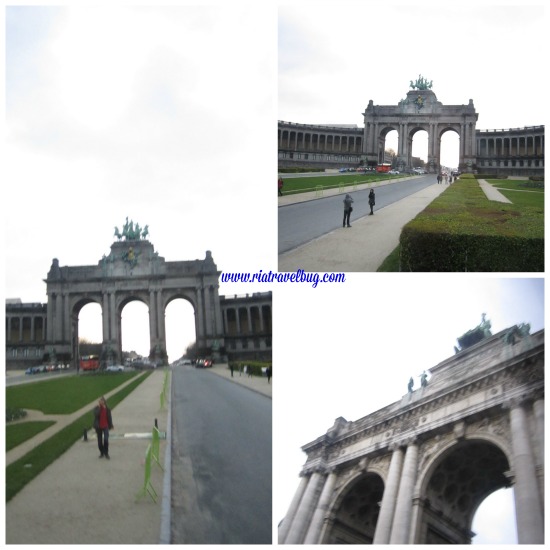 After the tour, we drove to a place that almost look like the Arc De Triomphe in Paris. It was a cross between the one in Berlin and in Paris. In both ends of the arc are the Auto World and the Royal Museum of the Armed Forces and of Military History. We didn’t go down in this place. It was just a drive-by kind for photo op while inside the tour bus.

Brussels is the host of the NATO Headquarters. It looked like a fancy airport to me but was unable to take a picture as I was in awe and seeing the numerous flags adorning the building’s premises is a giveaway that it was NATO.

We just passed by NATO HQ as we headed to the expressway leading back to Amsterdam.

We got back around 8:30 p.m. but was pleasantly surprised that there were still plenty of people in the street. It was weekend so we didn’t know that Amsterdam was crowded that time.

I will recommend a side trip to Belgium if you are visiting Amsterdam. Although you have to spare a day for it because it’s a full day tour. It’s worth the time and money and you get to see another country bordering Netherlands.

If you are planning to visit Belgium soon, you may check out great hotel deals here in my site. Search for hotels and rates here: