It’s that time of the year again when stories of peculiar apparitions and events in certain hotels around the world that makes them popular to the-not-so-faint-at-heart folks make their rounds.  I am not the thrill-seeker kind so I guess I’ll have to pass this one up. However, if you’re into these kinds of stuff then check out these famous hotels and see if you can book for a night. 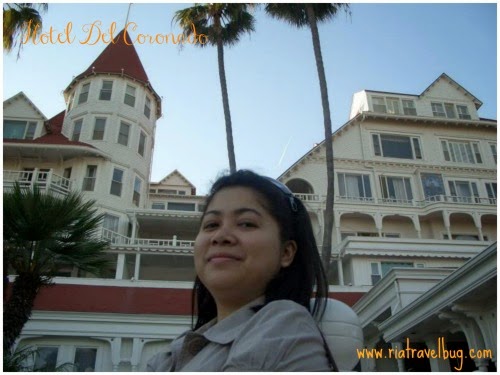 This hotel is a famous landmark in San Diego. It opened in 1888 and apparently, a young lady guest named Kate Morgan haunts the hotel. The story of Kate Morgan’s ghostly apparitions came to be when she checked in at Hotel Coronado alone and claimed that she got separated in the train with her “brother.” Her “brother” had her suitcase and would take care of her as soon as he arrived the hotel. However, no “brother” arrived in the coming days. And one day, she was found dead, early in the morning outside the hotel.

Her room was #3327. Who ever is brave enough to book there is one tough cookie! It is hard to reserve the room though so you may have to wait in line.

My family and I visited the hotel last 2009. We were too “chicken” to book a room so a photo-op was enough to satisfy our curiosity.

This old cruise liner-turned hotel is hosts to many “hot psychic hot spots.” The ocean-liner/hotel has plenty of haunted areas that there is even a “haunted tour” you can book to “experience” the weird phenomena happening in the ship.

If you want to experience something thrilling as the other tourists who went through the haunted tour in Queen Mary, then you can check out this site for more info: http://www.queenmary.com/tours-exhibits/tours-exhibits-attractions/haunted-encounters/

There are stories about the ghost of Louis de Buade, Comte de Frontenac that are claimed to be true. You may get lucky to see Louis sitting and looking sad on windowsills around the property.

The Chelsea Hotel has a star-power ghosts in its property. The likes of Warhol, Joplin and Twain haunts the hotel and this is also the same hotel where Sid Vicious (the punk rocker) stabbed Nancy in 1978.

One friendly bellman just loved his work so much that even after death, he still did his duties, helping guests and not taking tips. Another ghost in this hotel is from the very sad demise of a young bride who trampled to her death when she fell down the stairs because her dress caught fire. She could be seen by some guests dancing alone in the dining room and apparently, even pushing guests.

This hotel used to be Nazi and Soviet military prison which has been turned into a prison-themed hotel. Guests can experience light bulbs unscrewing on their own, doors that open and a lady ghost walking around the prison-hotel.

Isobella Shaw, the former Lady of the Castle in 1625, is said to have paid frightening visits to guests before disappearing into the night. Story has it that Lord Shaw had locked her inside a room, immediately after she gave birth to their son. She died after falling out of a window in an attempt to escape. It is believed she has wandered the castle for over 400 years in search of the son who was taken from her.

Since it was opened to the public in 1865, the Langham Hotel in London has been frequented by a number prominent personalities like Arthur Conan Doyle, Oscar Wilde, and Mark Twain.  It is said that one of the ghosts is of a man in Victorian evening wear who appears in Room 333 only during October. A guest claimed to have seen a ghostly figure of a man in military dress standing by the window on the fourth floor. Some say that it is probably the ghost of a German Prince who committed suicide by jumping out of a window just before the beginning of World War I. A famous guest of the hotel who seemed to not checked out is Napoleon III.

Do you know other hotels that are haunted? Have you ever stayed in any of them? If so, share your experience here.

10 Replies to “Spooky Hotels to Visit This Halloween”