In the subtropical climate of the Mediterranean is the beautiful island of Cyprus where mild winters turn into warm to hot summers. Believed to be the seat of civilization the Greek isle of Cyprus is the home to breathtaking vistas with up to 13 hours of sunshine in the July. On shore, in the mountains, or under the sea, there is always a new world to discover where east meets west. 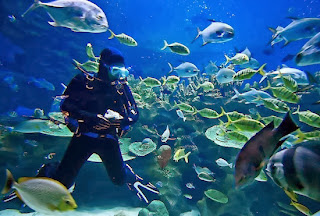 Scuba Diving
Cyprus has one of the longest diving seasons in the Mediterranean with sea temperatures that range from 27°C (80.6° F) to 16° F (60.8°F)The waters are perfect for both cliff and scuba diving.  For the scuba enthusiasts, the clarity of the water will entice you to explore the underwater coastal reefs that blossom with an ample variety of colorful fish, sponges, coral, sea anemones, octopus, mussels, and sea urchins. You might even spot a sea turtle or two due to the conservation efforts in the area.
There are multiple underwater caves and tunnels calling out to be explored. If it is the local marine life you are longing to explore start with the Akrotiri Fish Reserve Diving Site. You will need open water (OW) qualification to interact with all the local marine life that starts at about 9 meters down. You will be able to hand feed grouper, moray eels, bream and bass. Visibility is reported as great as 30 meters. After you explore the fish reserve stop by the Three Stars Wreck. This is a site that dates back to a 1972 fire at sea that requires and OW qualification. You will enjoy the partially submerged wreck in the Akotori area. There are many levels to this wreck and all area are safe to enter. Don’t pass this opportunity up.
If the adventure of wreck diving is more along the excitement you are looking for the Zenobia Wreck Diving Site, Green Bay Diving Site, and The Three Stars Wreck are all awe inspiring sites that await you. Zenobia is just 1.4 kilometers off the coast of Larnaka and will require and advanced open water (AOW) certification. This is often qualified as one of the 10 best wrecks in the world to dive. The Zenobia was a Swedish ferry that sank in 1980 and lies on its port side. The ferry and much of the cargo are still intact where many local fish have made their home.
Green Bay is the home of an ancient wreck that requires and OW qualification and is accessed by land after a drive from a car hire in Cyprus. The dive starts at 12 meters deep with a visibility of 45 meters. If history is your thing, you will be captivated by the dive at Green Bay. 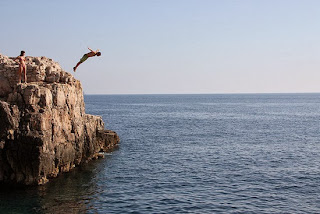 Cliff Diving
It is said that it take a great deal of personal fortitude and psyche to hurl yourself off the cliffs on Cyprus. Some experienced divers who spend their lives learning the ins and outs of the terrain still end up fighting the fear while others go soaring into the sky and then the sea with great abandon. The thrill is unspeakable. There are multiple places around the island to go cliff diving.
Cape Greco and the sea caves are a national forest area that is relatively unspoiled offering untold natural beauty. From the summit you will stare out over the sea while plunging into the warm waters waiting below whether you are diving or jumping. After taking the plunge you can explore the sea caves that stretched from the eastern edge of Ayia Napa up towards Cape Greco National Park.
Green Bay is a good site with cave diving in the Protaras area that is a safe shallow dive (the height not the depth) that is safe for beginners. At Paramount there are two reefs for diving but reef diving is a bit different and should be done with care. Konnos point is one of the most beautiful sites in the Cape Greco area that is suitable for all divers. So you will often see newbies throwing themselves to the waters below next to professionals soaring through the skies to gracefully descend to the waiting seas.
There are many other options for both scuba and cliff diving in Cyprus. This list is not complete by far, so take the time out and explore this ancient magnificent island of secrets and surprises.
By riatravelbugNovember 29, 2013Cape Greco National Park, cliff diving, Cyprus, Europe, Green Bay, Mediterranean, Protaras, scuba diving, Things to do in Cyprus2 Comments on Cliff and Scuba Diving in Cyprus

2 Replies to “Cliff and Scuba Diving in Cyprus”