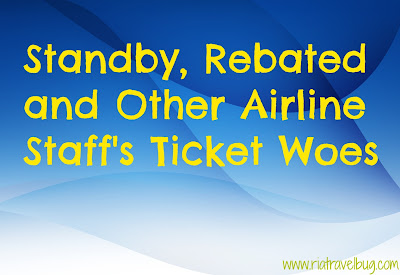 It is not always glamorous holding rebated, discounted or standby tickets issued to airline staff. While the perks of seeing the world sometimes outweigh the inconvenience of waking up early to drive back to the airport after being bumped off after several tries; I still prefer holding a full-fare or a confirmed ticket.

It’s not fun waking up very early or having lack of sleep thereof because I have to catch the next flight to my destination. Oftentimes, I end up having severe migraine, exhaustion, high blood pressure and many other physiological manifestations brought by airline stress.

I have been bumped off many times that I lost count already. I have even experienced sleeping in Hongkong International Airport once with a very small child in tow. I felt tired. I had self-pity and I felt so bad for my young princess who had to endure the cold, steel bench of the airport while waiting for our chance to get on board the next available flight back home. And the story didn’t even end well as I bought “full-fare” or revenue tickets just to get the next flight home. If I hadn’t done that, we would still be spending another night (or more) in Hongkong and that was something I wouldn’t let happen.

So, I just give a grin when people say how lucky we are for getting discounted tickets. Yes, it is a wonderful feeling and experience to travel and see the world when your seats are confirmed but it’s not a joke to stand next to the counter, waiting (and praying) for a chance to get in a flight so all that you have planned for would not be futile. And sometimes, lady luck wouldn’t smile at you. And when that happens, I either shed a tear or two because of the effort and time wasted (and even money for the missed hotel booking!) and I bow my head like a timid dog, luggage in tow, ready to drive back home. And, the same story would happen in the next few hours again until I get in the flight. Now, would you still like to have a subload, rebated or standby ticket on hand? If I have my way, I will rather pay the commercial fare for a guaranteed seat sans the stress of the “mystical seat factor” in the airline industry.

4 Replies to “Standby, Rebated and Other Airline Staff’s Ticket Woes”