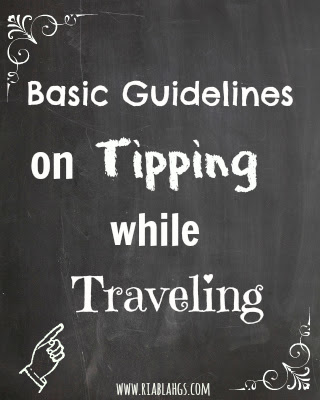 Do you give tip while you are traveling? I get various response from people I know who travels a lot. However, the majority do give a tip.

There’s really no definitive rule on this but it is a common courtesy to tip someone who has given you a good or even outstanding service. If you are to ask me, yes I do and even when there is already a surcharge on the tab. The tip is my way of giving the person an appreciation aside from the verbal “thank you.” Not only that, giving a tip is a good etiquette to observe and at the same time, I can help the person augment his or her income.

Below are suggestions about tipping while you are on travel:

1. Take note of these people. They deserve your tip especially when they provide a very commendable service. Taxi driver, valet attendant, housekeeper, doorman, bellboy, waiters/waitresses, the concierge staff if you get an upgrade or confirming that last minute reservation, tour guide and the shuttle driver, bartender and spa attendant.

2. Research the tipping custom of the country you are visiting so you are prepared. Some countries have tipping included in the bill. This is the case in most countries in Europe. However, Stateside, it can be between 15-20%.

3. Include “tipping money” in your budget before you head out to your destination.

5. If you are in a very tight budget, spare yourself from the awkward moment by informing the busboy that you will carry your belongings rather than asking for his service. Try to do things on your own so you don’t have to feel obligated in tipping.

Just remember, you are on vacation and you also have to stick to your budget. Much as there are acceptable amount of tip to give, in my own opinion, you still decide how much you can spare but do take into consideration the kind of service that was given to you. For me, if I have extra, I really do a lavish tip but most of the time, I stick to the 15-20% rate.

3 Replies to “Basic Guidelines on Tipping While Traveling”