My cousin’s place in Brooklyn was several blocks away from the waterfront. However, my cousin who has been in NY for the last 20+ years has never experienced worry and panic. This incoming hurricane was touted as the perfect storm, the one that would wreak havoc and casualties at its wake. True enough, a score of people in Haiti died because of Hurricane Sandy and the East Coast was bracing its tremendous and catastrophic impact on the highly populated NYC. We were already praying really hard that the communication lines and electrical supply would not be disrupted because it would be hard to keep tabs if we lose the power.

Some of my cousin’s neighbors already evacuated the evening of 27th. They were probably scared and in search of higher grounds. The wind was furiously blowing. It was very cold with less rain but more of some serious wind punch. The sky was an ominous shade of dark gray even when it was only 6pm. And the streets were empty. My cousin had briefed us on the possibility of mandatory evacuation so we kept our luggages ready just in case we had to leave for higher grounds.

Projection of the travel path of Hurricane Sandy initially showed NYC as part of the entry of landfall. However, towards the end of the day and early morning of 28th, it had moved towards New Jersey’s coastline. Gov. Cuomo. of NYC announced the suspension of all mass transit including buses on the 28th at exactly 7p.m.  My husband and daughter were still in Manhattan meeting with distant relatives and shopping for some stuff to bring home, not wary of the looming danger of the approaching hurricane.  Thank goodness they got home around 3 pm before the subway got congested. Another problem presented though, we were stuck in NYC! For how long, we really couldn’t tell.

So, come 28 October evening around 8pm, with a gust of 80-mph (from 90-mph clocked earlier), Hurricane Sandy hit Atlantic City in New Jersey. The Frankenstorm whipped surge of water in the Jersey shores and other low-lying and near the water areas in NYC like Lower Manhattan, Battery Park, Long Island Sound.

In NYC, Lower Manhattan got inundated and subway stations were not spared prompting the disruption of electrical power lines in the area.  Some areas in Brooklyn experienced power outage too. Several blocks from my cousin’s place were in the dark and I am very thankful that my cousin’s block in the 65th St. were spared. Most grocery marts have empty shelves. We were lucky enough to salvage some bread and canned goods in the nearby Walgreens as it was still stocked with water, soda and other ready-to-eat food.

Aside from the storm, a fire broke-out in the neighborhood of Breezy Point in Queens, burning hundreds of properties down to the ground.  Most of the residents have already evacuated so the area turned out to be an empty, smoke-filled community.

Flights were cancelled for both international and domestic. La Guardia, JFK and Newark airports had been shut as runways became flooded. We were stuck in NYC because of Hurricane Sandy and I was not very happy about it.

The storm has passed. We checked out the neighborhood on 30 Oct. and thankful that aside from fallen trees, damaged cars and slight damage to properties; there were no casualties around the vicinity of my cousin’s place. We saw part of the clear, blue sky peeping through the clouds on Tuesday morning. I am just happy that the hurdle through the Hurricane Sandy is over. However, people who lost their properties and probably even lost some of their loved ones in the hard-hit areas of New Jersey and other nearby states ravaged by Hurricane Sandy are still reeling up to this time. 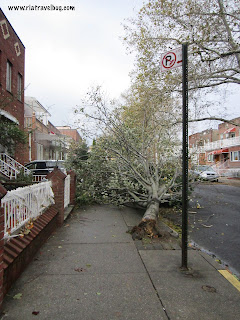 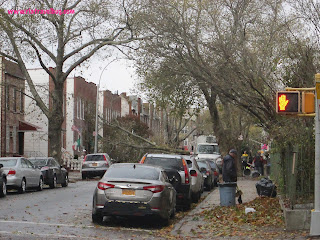 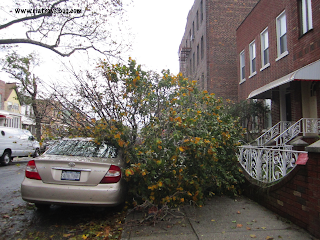 (The pictures above were taken near by cousin’s house in Brooklyn. We’re glad it was just property damage and no report on lost life.)

18 Replies to “An Experience With Hurricane Sandy – Part 2”